The ReCODE Program delivers personalized information and resources for those experiencing cognitive decline and are seeking a reversal of symptoms and brain health optimization with the Bredesen Protocol.

ReCODE is an annual membership program that uses the ReCODE report to identify the six subtypes and sources of your cognitive decline, which is the starting point to reverse the symptoms of Alzheimer’s Disease, MCI, and SCI.

The ReCODE Report is a highly individualized evaluation of your cognitive health — an assessment based on lab results analyzed by a software program created by Dr. Dale Bredesen and his team at Apollo Health. The report includes information on an individual’s Alzheimer’s subtype, supplemental information from Dr. Bredesen’s research, nutritional instruction, hormonal support, and more. Download a sample ReCODE Report here.

ReCODE, a subscription membership program billed monthly costs $75 per month plus the cost of an initial mobile blood draw**, and genome test for $945 for all but the following states: Rhode Island, New York, Pennsylvania, California, Alaska, Hawaii, or Maryland. Individuals residing in the seven states can purchase a scheduled walk-in blood draw, and test for $780 or have a trained practitioner order the tests. Those that wish to pay for the year in advance can do so at a discounted rate of $810 for the subscription price, $1755 for a mobile lab draw, and $1590 for an in-person lab test at a Quest Diagnostics facility.

In an effort to bring you the lowest possible pricing on the ReCODE blood panel, we have extended our lab costs to you — Apollo Health does not make a profit from the labs. This program requires a one-year commitment and supports ongoing preventative treatments, which may take approximately three months to a year to show initial reversal or improvement.

** Labs are only available to U.S. residents.

The Science & Technology Behind ReCODE

Internationally recognized expert in the mechanisms of neurodegenerative diseases, Dr. Dale Bredesen, has over 30 years of research into the causes of Alzheimer’s and cognitive decline. Dr. Bredesen’s research has shed light on the counterintuitive roadblocks and toxic “insults” in modern society that keep us from preserving and improving our brain health. These insults, such as inflammation, insulin resistance, resistance to specific pathogens in our environment, and multiple other factors, contribute to cognitive decline and happen in our bodies over time, often taking less than a decade to manifest, negatively impacting our brain health.

Inspired by Dr. Bredesen’s research and clinical discoveries, the ReCODE Program and the Bredesen Protocol provide you with the tools needed to defend yourself against these toxic insults, and in some cases, reverse symptoms preventing further decline.

Partnering with Dr. Bredesen (Alzheimer’s research pioneer of the ReCODE Protocol), Apollo Health has created the first software product that identifies subtypes of cognitive decline (types 1-6 Alzheimer’s disease, published by Dr. Bredesen). The software generates optimal personalized medical information that allows users and practitioners to achieve unprecedented success in the prevention and reversal of cognitive decline, resulting in the ReCODE Report. Download a sample of the ReCODE Report here.

There are several ReCODE annual membership plans available, billed monthly, annually, or at a discounted rate, and those are:

Please note that you may need additional tests recommended and performed by a physician, and that could lead to additional costs.

The ReCODE Test Panel List can be found here.

After enrolling using the button below, you will be given the option to select the product type of your choosing. For further questions, contact us at info@ahnphealth.com, or call us at (800) 450-0805, Monday through Friday, from 9:00 am to 5:00 pm PT.

* Due to regulatory restrictions, a mobile blood draw option is not available in the following seven states: Rhode Island, New York, Pennsylvania, California, Alaska, Hawaii, or Maryland. Individuals from these states will need to purchase and schedule a walk-in blood draw from Quest Diagnostics.

Join a community dedicated to your health and wellness.

The Practitioner Locator Tool provides ReCODE subscribers with full access to a network of Bredesen-certified coaches, physicians, and nutritionists who can provide guidance while practicing the Bredesen Protocol.

Identify the specific subtypes and source of your cognitive decline, and check for the ApoE4 gene type (genome test).

Advice on supplements based on your subtype of cognitive decline found in the ReCODE Report.

The ReCODE Mobile App provides subscribers with a convenient way to access all of the available resources for the program, such as nutritional and lifestyle guides, forums where you can post and read messages from other community members, view your data and progress, access cognitive testing, and a complimentary BrainHQ account for brain training exercises.

All ReCODE Protocol and Bredesen Protocol assessments and initial treatment suggestions must start with a ReCODE Report. Apollo Health highly recommends consulting with a qualified ReCODE Certified practitioner before beginning the protocol. The ReCODE Protocol is a process that may require three months to a year of treatment and lifestyle changes to show initial improvement or reversal. Treatment must continue to maintain an effective reversal of cognitive decline and continued improvement.

Find a practitioner certified in Dr. Bredesen’s protocol near you.

With both ReCODE and PreCODE, you’ll identify the subtypes and the sources of your cognitive decline – and be empowered to slow and prevent it.

ReCODE is the first to report the reversal of cognitive decline in patients with early Alzheimer’s disease and includes all metabolic and genetic laboratory assessments to generate a personalized ReCODE Report.

The ReCODE Protocol is based on the breakthrough findings of Dr. Dale Bredesen, a world-renowned leader in Alzheimer’s disease research and a New York Times Best-Selling author.

The ReCODE Report is the first step to all ReCODE and Bredesen Protocol treatments. Review your results with a certified practitioner and begin your journey to health.

Dr. Bredesen’s career has been guided by a simple idea: that Alzheimer’s and cognitive decline as we know it is not just preventable, but reversible. Thanks to a dedicated pursuit of finding the science that that makes this a reality, his idea has placed Dr. Bredesen at the vanguard of neurological research, and led to the discoveries that today underlie the ReCODE and PreCODE Reports.

The End of Alzheimer’s, Dr. Dale Bredesen laid out the science behind his revolutionary new program that is the first to both prevent and reverse symptoms of Alzheimer’s disease. Now in The End of Alzheimer’s Program, he lays out the detailed program he uses with his own patients. Accessible and detailed, it can be tailored to anyone’s needs and enhance cognitive ability at any age. 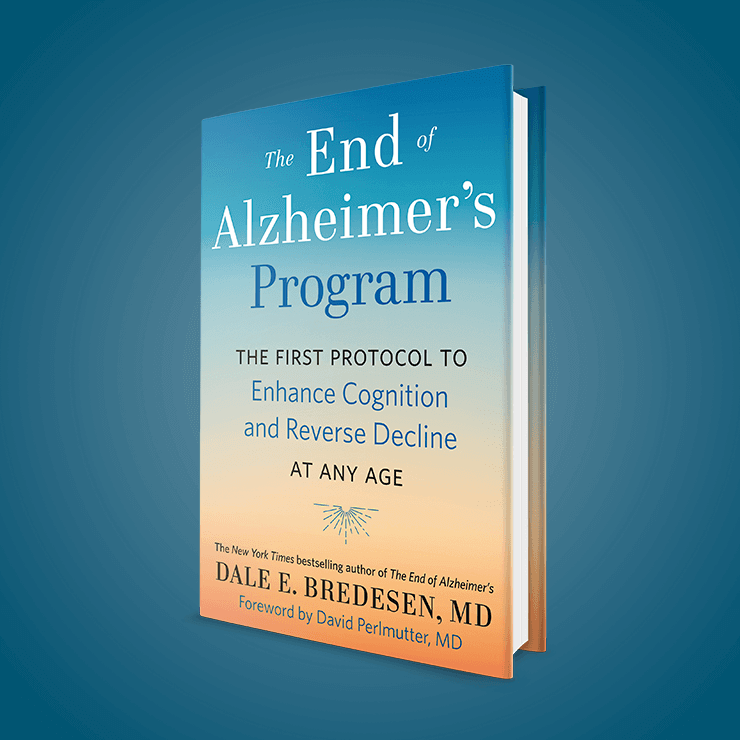 Our solutions are designed to fit anyone, whether you’re already showing symptoms or merely hoping to prevent them.